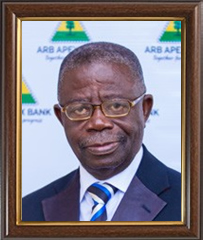 Early life and Education
Born on September 4, 1954 at Adanwomase, Michael Agyeibi Agyekum had his Secondary education at the T.I Ahamadiyya Secondary School in Kumasi from 1970 to 1976, where he obtained O’ and A’ Level Certificates.

He attended the Kwame Nkrumah University of Science and Technology from 1977 to 1980, where he obtained a Bachelor of Arts degree in Social Sciences.

He is a fellow of Micro Finance Association, United Kingdom.

Work life and experience
He is a veteran in the Rural and Community Banking (RCB) industry, having worked with banks including, Adonten Community Bank, Ahafo Community Bank, Denkyiraman Rural Bank, and Kwaebibirem Rural Bank where he currently serves as the General Manager (GM).

He was initially posted to Kwabibirem as a relieving GM, but after three months, he was hired as the substantive GM. He believed that an encouragement from the MD of the ARB Apex Bank made him to take up full time responsibility at Kwabibirem Rural Bank.

He did his National Service at Sogakope Secondary School, where he was a Geography Tutor. He worked briefly after National Service as an Assistant Planning Officer in the Department of Transport and Communications.

Mr Agyekum then joined the Great African Insurance Company in 1983, worked briefly and finally landed at the now defunct National Savings and Credit Bank in 1984 as Manager Trainee. He was also instrumental in the setting up of Atweabam Rural Bank in Duayaw Nkwanta.

He has a combined managerial experience of over 40 years.

Training
In 1989, he was nominated by NSCB to attend a 12-week course in FinAfrica Institute in Milan-Italy. After the course, he was awarded Diploma in Banking Economics. He gained a lot of experience in savings mobilization and project appraisal from FinAfrica.

His experience at NSCB-Tepa Branch prepared him well for his entry into the Rural Banking sector. In 1994, NSCB was merged with Social Security Bank (SSB) now SG-SSB