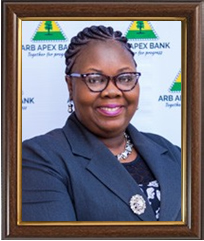 She completed Begoro Presby Secondary School in the year 1992 and continued to the S.D.A Training College where she pursued her Post-Secondary Teacher Training Education for three years as a Trained Teacher.

Mrs Opoku-Arthur obtained a Higher National Diploma in Accounting from the Koforidua Polytechnic in 2001 and graduated with an Executive MBA
in Banking and Finance at the Paris Graduate School of Management in 2013.

Experience
She taught for three years. She did her National Service with Adonten Community Bank and given permanent employment with the Bank in 2003 due to her hard work. Lucy worked as an Assistant Accountant at Head Office and was later appointed as the Branch Manager of the Koforidua Branch of the Bank.

By dint of hard work, good customer relation and prompt response to issues, she was invited for an interview when the Bank was looking for an Accountant at the Head Office.

She then became the Accountant at the Head Office in charge of all operations of the Bank.

With the help of the Board and her management team, she has opened two additional branches for the Bank, at Anyinam in the Eastern Region and Ejisu in the Ashanti Region.

The Bank’s deposit portfolio has grown by a remarkable 400 percent under her able watch, something she attributes to “the team work by the management and the mobilization drive put in place”.

Family Life
Mrs Opoku-Arthur is married to Mr John Opoku-Arthur who is the Eastern Regional Accountant of the Ghana Cocoa Board. They are blessed with two children: Nana Yaw, and Paa Yaw