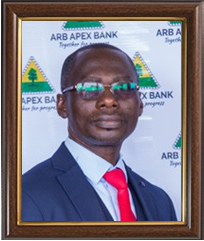 Mr Isaac Sasah began his Secondary education at Snaps College of Accountancy and Secretariyship in Accra in the 1988/89 academic year to pursue Accountancy programme (RSA II and III) and completed in the year 1992. He did the GCE ‘O’ and ‘A’ Level within the same period.

Experience
Mr Sasah started his banking career at Amenfiman Rural Bank after completing his National service from 1992 to 1993. Due to hard work, humility, selfless service rendered during his National Service with the Bank, he was employed by the Board of Directors as a Clerk Grade One in October 1993.

He rose through the ranks to the position of Senior Assistant Accountant, the position he held until July 2005, when he left for Accra to continue with his education.

He gained a broad experience in the areas of Credit, Internal Audit, Remittances and Banking Operations while working with the bank.

Mr Sasah was employed by Kermah’s Enterprise/ J & D Textiles in Accra as an accountant on Auugust 1, 2005.

Achievements
Some of his major achievements include:

Family life
Mr Sasah is married to Aneeta and they are blessed with five children, Stephen, Yvonne, Joycelyn, Mildred, and Elsie.