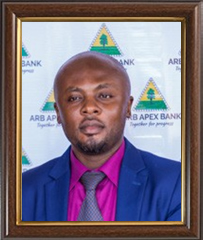 Education
Mr Gordon Kenneth Wotortsi began his education at the Koforidua Technical University where he studied for the professional Accounting Technician qualification. He is also a graduate of the Institute of Chartered Accountants Ghana (ICAG) and is an Accounting Technician of West Africa (ATWA qualified) in 2007.

He also obtained a Bachelor of Science (Accounting) degree and a Master of Business Administration (Accounting and Finance) from the University of Professional Studies Accra (UPSA) in 2013 and 2016 respectively. Mr Wotortsi is currently a level III student of the Institute of Chartered Accountants Ghana (ICAG).

Experience
With an inspiring beginning, Mr Wotorshi started work after completing Senior High School (SHS) as a Mobile Banker and Cleaner at Akim Bosome Rural Bank at the Akim Oda Branch in 2001. He later became an Accounts Clerk between 2003 and 2004 before resigning to pursue more laurels in education.

He did his mandatory National Service at the Islamic Education Project (IEP), Accra as a teacher between 2007 and 2008.

He moved to Citizens Rural Bank, as the Head of Internal Audit in November 2017 and was appointed as the Acting General Manager in August 2018.

Achievements
Mr Wotortsi was directly involved in bringing a lot of reforms in all the places he has worked, including his current employers, Citizens Rural Bank.
He said he considers his noble strides humbling and is excited to be at the apex of his career in the rural banking sector at the age of 36.

Family life
Born on February 14, 1983, Mr Wotortsi is married with one lovely boy.