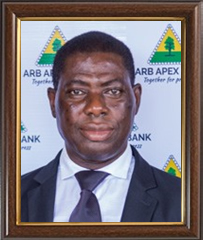 He also graduated in Banking and Finance from Ghana Institute of Management and Public Administration (GIMPA).

Experience
Mr. Dickson Owusu Ansah was appointed General Manager of Kaaseman Rural Bank Limited in January, 2014. He however, joined the bank as a clerk in 1989 after obtaining his Advanced Level Education. He rose through the ranks from Clerk through Branch Manager, Accountant and Deputy General Manager, until he was appointed as the General Manager. He has been in the banking industry for the past thirty (30) years.

Family life
He is married to and blessed with five children.