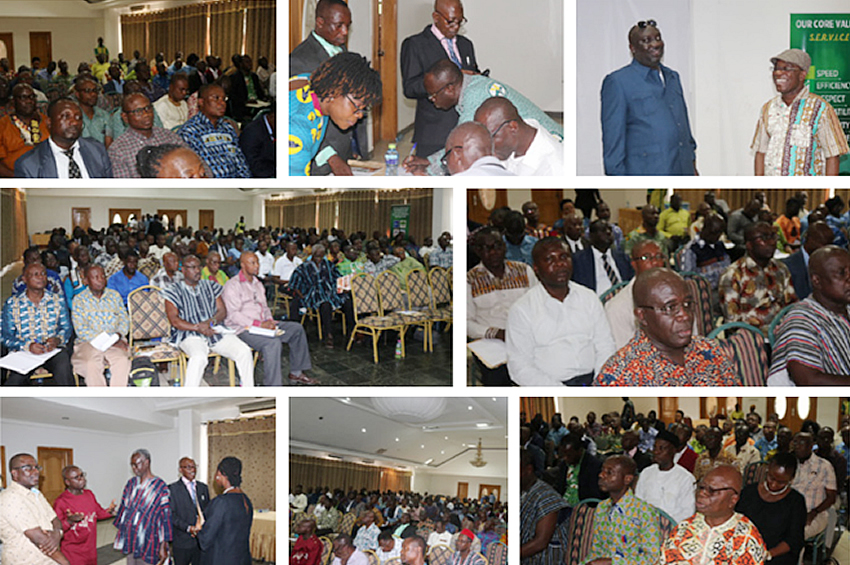 The meetings began in Takoradi on Friday, March 8, 2019 for 98 Directors, CEOs and GMs drawn from 30 banks from Central, Western and Western North regions respectively

The second meeting was held in Kumasi on Friday, March 15, 2019, for 156 Directors, CEOs and General Managers drawn from 30 RCBs in Ashanti, Bono, Bono East, and Ahafo regions respectively.

The fourth cluster was held at Koforidua on Friday, March 29, 2019, for 90 Directors, CEOs and General Managers from 31 banks from Greater Accra, Eastern, Volta and Oti regions respectively.

Also in attendance were Mr Kojo Mattah, Managing Director of the ARB Apex Bank and the management team of the Bank.

Highlights
Mr Kojo Mattah, encouraged the RCBs to endeavour to comply with the Bank of Ghana’s regulations in order to avoid the Regulator’s sanctions. Mr Mattah also requested that the RCBs appoint Compliance Officers to support the compliance efforts of their banks.

He further revealed that the LI 1825 was being reviewed and was expected to become operational before the end of 2019, noting that some of the

key elements in the amendment are “the reduction of the Apex Bank Board membership from 13 to seven (7) and Chapters to elect four (4) representatives to serve on the Board of the ARB Apex Bank”.

He also indicated that as part of the drive to deepen the digital transformation of the RCBs and the ARB Apex Bank, “out of

50 automated teller machines (ATMs) that were earmarked for 2019, 40 have been deployed as at December 2018 and 10 ATMs still in stock for interested RCBs”.

The Rural Banker magazine
He said the novel magazine, which was launched in Kumasi in April 2018 has become the official mouthpiece of the RCBs and has so far done very well in telling the RCBs’ story in a compelling way.

The first edition which came out in April 2018, focused on technology and the EMV compliant locally issued cards.

Core banking application software issues
RCBs which have exited the T-24 banking platform were encouraged to return “as the future is promising”. Four banks, namely Adansi, Dumpong, Bosome Freho and Wenchi, which recently re-joined the T-24 platform were lauded for the initiative.

It was revealed that Temenos (T-24), which is now on version 14, would soon be migrated to a higher version of R 18 and then R

19. The project, the participants were told would be supported by the Financial Sector Development Project (FSDP).

Other matters Participants also discussed the ‘Prestige Traveller” transport project by looking at the benefits that could accrue to participating RCBs.

Mr Kojo Mattah also told RCBs which were facing challenges in recouping their investments with third parties to formally approach the ARB Apex Bank for assistance.

RCBs which have not met the Bank of Ghana’s new minimum capital requirement of GH¢1.0 million should welcome strategic investors to support and sustain their banks.