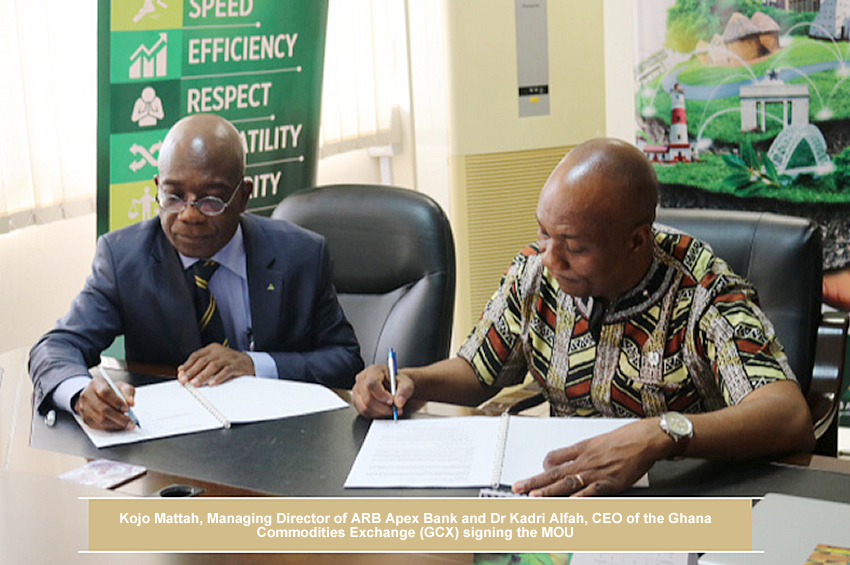 At the signing ceremony in Accra, Dr Kadri Alfah, Chief Executive Officer (CEO) of GCX said he believed that, “ARB Apex Bank already have some of these small holder farmers that you are supporting and that is why we believe that this partnership is critical to us at the Exchange”.

Dr Kadri commended ARB Apex Bank for partnering with the GCX to help support farmers in the country.

He said the volume of trade recorded on the Exchange so far ran into several thousands of metric tonnes and valued at GHC369,995.50 (Three Hundred and Sixty-nine Thousand, Nine Hundred and Ninety-five Ghana Cedis and Fifty Pesewas).

On his part, Kojo Mattah, Managing Director of ARB Apex Bank stated that, “we are prepared to support anything that would make the project successful. When we are talking about farmers, they are the bedrock of the economy and anything that would make them comfortable, we are ready to support”. The Exchange, which became operational in November 2018, has so far traded in yellow and white maize with other commodities expected to come on stream soon.