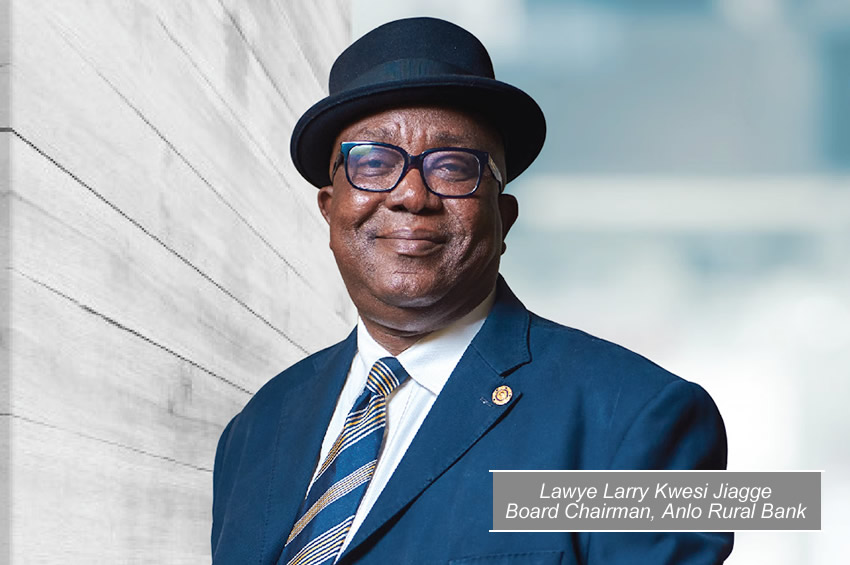 The Rural Banker magazine visited Anloga, to learn from the team, which has carried the mantle of the founders of the Founded in the year 2000 by 12 illustrious sons of Anlo in the Volta Region, Anlo Rural Bank, has remained a very attractive Bank. The list of original shareholders included:  Benjamin T.K. Adadevoh, Moses A. Baeta, Prof N.K. Kumapley, William Edem Fugar, E.A.K. Kalitsi, Alex Ashiagbor, Jenkins K. Awumee, Cdr (rtd.) K.T. Dovlo, G.D. Kumordzie, William K. Ashiagbor, Christian B.Y. Ahiabor, and Robert Kudawu. ANLO RURAL BANK - THE PRIDE OF THE VOLTA Bank on how they have been able to strategically position the Bank, which has become the pride of Rural and Community Banking (RCB) in the Volta Region. We bring readers our interviews.

Gideon Kwabena Odei is 44 years old and a product of the Kwame Nkrumah University of Science and Technology (KNUST), who graduated with First Class Honours in BSc (Agriculture) in the year 2001. Gideon had a practical training in Commercial Farm and Export Management on a USAID sponsored Amex-TechnoServe Graduate Apprenticeship programme for a year.

He then worked for about four (4) years with various commercial farms before joining North Tongu Rural Bank (now Amuga Rural Bank) as the Principal Project Officer.

According to him, “besides working diligently in the Credit Administration of the Bank, I endeavoured to study and learn banking operations on the job and by July 2008, I was appointed the Operations Manager, a position I held until June 2017 when I was appointed the General Manager”.

In the same year however, there was an opening at Anlo Rural Bank for a General Manager. “I applied and was fortunate to have been selected as the General Manager, together with an almost completely new set of senior management team recruited by the Bank in November 2017”.

Gideon is married to Ivy and they are blessed with two kids, namely: Jared and Jeanette, who are aged eight (8) and three (3) respectively.

He revealed that the Bank currently had “56 staff made up of 39 males and 17 females with educational qualifications raging from Diploma to Master of Science (MSc) and Master of Business Administration (MBA) from varying fields such as Accounting, Agriculture, Auditing, Banking, Economics, Finance, Marketing, Risk Management, etc.”

He noted that majority of his staff members were below age 40, indicative of the vibrant and energetic team, which is supporting the team’s effort. “There is therefore the potential to train and retain staff, allowing them to stay on with the Bank for a longer duration and our attrition rates are also very low”.

The Bank acquired and installed an automated teller machine (ATM) in September 2018. The ATM has greatly reduced the customer queues and turnaround time at the main banking hall in Anloga.

The ATM, “which is a self-serving bank teller has improved customer satisfaction and given the staff enough time to concentrate on deposit mobilization and other activities, which have been equally key to our operational success”.

Gideon added that, “in terms of direct fee incomes, we are yet to make significant gains but we expect and are sure the trend will change when the set-up is completed for RCB cards to be accepted by the ATMs of all local banks. The future for card business in RCBs is promising”.

One main product of the Bank is the “Norvinenyo Microfinance (Group Lending) scheme”, which Gideon added has 173 groups with more than 2,000 members, who are mainly women”. This product represents about 31 percent of the Bank’s total credit portfolio.

Another product is the “Susu Scheme”, which brings banking to the doorsteps of traders and self-employed individuals in the surrounding communities. “The scheme enables them to access credit facilities on flexible terms”, he added.

The “Susu Scheme” also accounts for 16 percent of the Bank’s credit portfolio. They also have Salary Loans, which are “disbursed to customers in record 24 hours”.

Another special product in their product line is the “Fixed Deposit Plus”, which “gives customers the opportunity to do placement of funds safely and at attractive but sustainable interest rates”.

The Bank’s products and services are therefore tailored to the needs of the various types of customers in the catchment area, such as salaried workers, petty traders, cottage businesses, wholesalers, retailers, artisans, transport owners, farmers, fishermen, etc.

Fortunes
With four (4) Agencies in Anloga (head office), Dzelukope, and Abor; Anlo Rural Bank has two banking halls at the head office at Anloga with one exclusively providing “Susu and Microfinance”.

The Bank is therefore very liquid and customer confidence has been high, especially in terms of meeting the demands of depositors. “The Bank has consciously strived to avoid exposing depositors’ funds to avoidable and unreasonable risks”, he noted.

Challenge
Gideon revealed that it was a joy and a humbling experience and a big challenge for Anlo Rural Bank to be referred to as the most outstanding RCB in the Volta Region. “The challenge is to maintain that position, especially in the face of the recent difficulties and challenges facing the financial sector in general”, he added.

Lawyer Larry Kwesi Jiagge, the Visionary Board Chairman
Lawyer Larry Kwesi Jiagge Chairs the eight-member Board. Other members of the Board are, Mama Biana Dadzie I, Vice Chairperson, Mr Sui K.K. Fiawoo, Dr Kwasi Gbordzi, Mr Christian R.K. Bensah, Mr Godwin Amelor, Mrs Precious Eyra Dzissah-Agbemabiase, and Mr Bartholomew K. Ahadzi. All Directors have been serving on the Board since 2011, except Mr Ahadzi who joined the Board in 2019.

According to Lawyer Jiagge, “the Board of Directors of the Bank is very vibrant and cohesive. It is a great team with members from different professional backgrounds in Accounting, Banking, Education, Finance, Insurance, Information Technology and Law. Each member has contributed very well to deliberations, discussions and decisions on all matters affecting the Bank”.

Vision for the Bank He indicated that his vision is to maintain Anlo Rural Bank’s position as a pacesetter in the Volta Region as well as remain one of the most well managed RCB in the country.

A key factor to distinguish the Bank from its peers “will be to continue to strengthen and implement good Corporate Governance policies and practices as Board of Directors.

We will also ensure that Management adheres to and improves upon the systems and controls as well as ensure regulatory compliance”, he added. He said, another key factor is to leverage on technology and digital channels that the ARB Apex Bank is rolling out for the RCBs.

“This will enable Anlo Rural Bank to meet the demands of our customers and result in improving the income flows and market penetration”, he said.

“My vision is to see my Bank foster a closer collaboration among the RCBs in the Chapter as well as the country as a whole. The Bank therefore plays a key role in the Volta Chapter of the Association of Rural Banks and provides various kinds of support for sister RCBs in the Chapter, he revealed adding that, “this will surely inure to the benefit of the RCB community and make the RCB brand a success”.

Community Support
The Bank has consistently supported the Farmers’ Day celebrations in the Keta Municipality every year by donating some farm inputs and implements.

Lawyer Jiagge revealed that “the Keta Municipal Assembly is always appreciative of the support of the Bank and this has fostered a cordial relationship between the Assembly and the Bank. The farmers have also shown appreciation by keeping faith with the Bank and continue to do business with us”.

The Bank has also supported the Traditional Council with donations towards the annual Hogbetsotso Festival. The celebrations promote the culture and norms of the people of Anlo and also promote tourism and business in the community.

Under the aegis of Lawyer Jiagge, the Bank has donated ICT equipment and books to selected schools and also supported other developmental projects in the health and education sectors of the catchment area.

Anlo Rural Bank thus has proven to be a socially responsible institution to the mutual benefit of the people of Anlo and the shareholders and customers of the Bank.

Three things I want to be remembered for

The first legacy that I want myself and my other board members to be remembered for is to hand over a very robust, liquid and profitable Bank with very well qualified staff, who we think can move the Bank into the future.

Secondly, we want to be remembered as the Board which expanded the distribution network of the Bank. We have only four

(4) branches, but because we have started a Group Lending Scheme, we are in every nook and cranny of our catchment area.

Thirdly, the Board and I would like to be remembered as the team that put up a very huge head office building for the Bank at Anloga. The truth is that the way we managed the construction of the building, was such that it did not impact negatively on the fortunes of the Bank. We managed the construction in such a way that the year we launched the head office building, we still made profit.

We have therefore put in all the structures to make our Bank a very liquid and profitable Bank. We have laid the right foundation and we have got the right quality of staff in place, to carry the vision forward. In the last two and three years, we have laid off all the unproductive and laggard staff who were impeding our progress.

We hope that those who would come after us would be able to leverage on what we have done and build upon the foundations we have laid.

Editor’s note:
The contribution of Anlo Rural Bank to the local economy is promising. From the position of the Board of Directors and Management, the Bank has an enormous potential and is poised to help liberate the abundant wealth in its catchment areas.